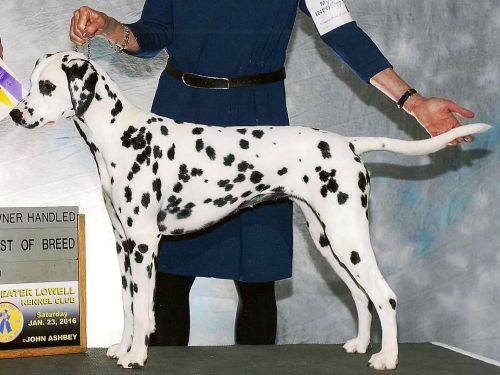 Find her on the OFA Database

Lyra is from an all bilateral, all brown eyed litter. She easily finished her UKC Championship at 16 months of age and made the Top 10 for 2014 ranking in at #8 with very limited showing. She then finished her AKC Championship owner-handled from the Bred-By Class by Linda. Recently she went Best of Breed under a Dalmatian breeder judge earning a Grand Champion Major and 4 GCH points. Health testing is complete, she is BAER bilateral, Thyroid normal, OFA eye exam clear of inheritable diseases, OFA hips- good. Her DNA results show she does not carry the lemon or brindle pattern gene or the long coat gene. She is liver factored.

Patch Mountain and Blackthorn Dalmatians are excited about the upcoming planned breeding of Lyra to Huxley, Proctor N Esquire's Brave NU World with puppies expected in the spring of 2016. Huxley is owned by Ken and Eva Berg.
Both Huxley and Lyra have their OFA CHIC numbers.